Melbourne ballers, it's GAME ON!
The 4th Season of Melbourne Basketball League is here!
MBL 2K20 is going to be the battleground of the best ballers in our city! This is a yearly event where best ballers from all around Melbourne come together and battle for basketball supremacy. If you got game, MBL is the place for you! We are proud to be one of the most-watched basketball leagues in Melbourne based on viewership Insights in the past 2 years. Come see for yourself, check out our MBL Facebook Page and Melbourne Basketball League Instagram.

Watch how the 2019 MBL Grand Finals went down between Melbourne Warriors and MLV Chargers!

If you are new to MBL or just heard of MBL, what is it?  MBL is an open league. It means everybody can play here - Pros, Semi-pros, collegiate and recreational level players. Unlike other leagues, we don't have drafts or try-outs in MBL. We let ballers join in and show their FIREPOWER without any limitations.

GAME ON! This phrase means a lot to us. It means no excuses, you got game...just play the game.

We are removing the red tape and the old broke system that tells an athlete "You are not good enough to play here".  We believe everybody deserves the opportunity to show what they’ve got in the game of basketball and that's why we formed this league. MBL started in 2018 but the founders of MBL have done multiple Victorian basketball events and overseas leagues prior to MBL. We know what we've done,  we know we're capable and we know where we are going. Our mission has always been to showcase the Australian athletes and that is what this is all about. We are now on our 4th Season, AND THIS IS MBL 2K20!

-The season will start on June 2020 TBA
-Player rego is $195 includes one set of uniform from Litwear must be settled on or before the 30th of March.
-MBL games are usually on Saturday nights (usually 5 pm - 9 pm) held at Rowville Stadium (map location)
-You can join as a player or as a team.

DON'T MISS OUT!
THE OPPORTUNITY TO JOIN THE SEASON IS JUST A CLICK AWAY!

-This is an Open Men's Basketball Season: 18 years old & above, medically fit to join competitive sports
-We currently have 8 TEAMS but this could increase depending on the registrations. The tournament is a Single Round robin format.
-Each Team may have a maximum of 15 Players or a minimum of 10 players
-You may join as a player or as a team. There are no drafts or tryouts in MBL. It's an open league, anyone can join our events.
-Complete uniforms are required. Players with no complete official uniforms are not allowed to play.


GAMEPLAY AND ELIMINATION ROUND
-Elimination Round will have a Single Round Robin format.
-Regular Season games will have 4 Quarters, 10mins in each quarter in a running time mode, except for the last 2 minutes of the game.
-There will be no 24sec shot clock rule except for the last 2 mins of the game.
-Five fouls to give.
-Two timeouts each qtr. Time runs on these timeouts.
-Teams can alter their roster within the first 5 games of the season. New players that will be added will need to have a complete uniform and fully settled rego before he can play.
-There is no overtime in the Elimination round.


SEMIFINALS & MBL GRAND FINALS
-Only 4 Teams will proceed to the Semifinals.
-Players who have played at least a game in either Preseason or Elimination Round will be allowed to play in the Playoffs (QF, Semis & Finals).
-Semifinals & Grand Finals games will have 4 Quarters of 10mins per game in full clock mode. There will be 24sec shot clock rule on the entire game.
-Two timeouts each qtr. Clock stops on timeouts.
- Team AVG scoring is used for tiebreakers.
-More details will be posted on our MBL Melbourne Basketball - Facebook Group and website soon.

Depending on the number of player registrations this season, the teams we currently have is 8.
Melbourne Capitals
North Melbourne Stags
Point Cook Panthers
Brightstart Bulldogs
Blackburn Griffins
Redbacks
Melbourne Warriors
and the defending Champions MLV Chargers

All the new ballers who don't have a team yet will be put in a newly formed team.
You'll meet new ballers here and new mates as we form a brotherhood.
They can also fill up the missing spots in teams that need a certain type of player.

MBL Player Rego - $195
-This is really all you need to pay, no hidden fees here in MBL. $195 includes your Season Fee and Litwear Season Jersey (one set of jersey).
-MBL Player Profile on our apps and website.
-All games has stats recorded in real-time. Viewable on our website https://officialmbl.com.au or on the MBL App.
-Year-round of Weekend Jams (basketball scrimmage, practice & shootouts). Weekend games will start this March 2.
-For exceptionally good players - you'll get #MIXTAPE Highlights
-Game Photos and videos every game!

Weekend Scrimmages - $5/Player
-Year-round we have several Saturday Night Scrimmages. This is only $5/player.

For sponsored Teams:
-Team registration costs $1950.
-This covers the season fee only.
-Each Team may have a maximum of 15 Players or a minimum of 10 players 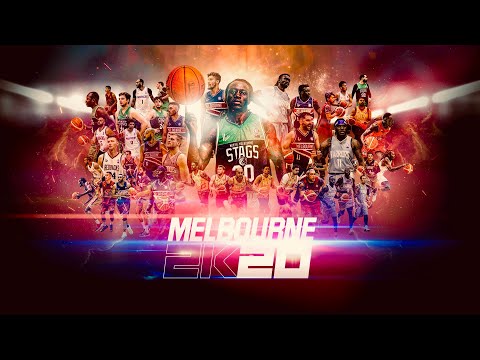 The official poster of MBL 2K20 - by Melbourne Basketball League